This documentation relates to QuickBuild 10.0.x
Select here if you are using a different version

The Build Grid can be managed by switching to Grid tab as shown below:

System defined attributes include all environment variables and all Java system properties.

User attributes are custom attributes that are defined by user to identify ability/environment of the node. For example, if the agent has Ant and Maven installed, you may define user attributes to reflect this installation as below:

A single unit of work running on a grid node is called a grid job. In most cases, it is just a step. A grid node may have many jobs running concurrently (for example, steps from builds of different configurations). The number of concurrent jobs is limited by node resources (such as working threads). If the resources are exhausted, newly arriving jobs will be waiting in the queue. A typical job monitoring screen looks like this:

The whole grid can be partitioned between different projects by assigning nodes in advanced setting of a configuration like below: 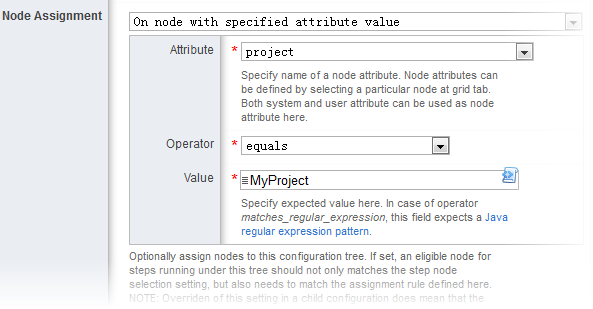